(As I continue to get caught up on sharing the events of the past summer/fall, this post covers my trip to Las Vegas for the annual Americas Conference of my hotel’s parent company, IHG. Representatives from the corporate offices of Intercontinental Hotels Group, and thousands of hotels from North, Central, and South America gathered for four days of training, meetings, and award recognition. And shenanigans…it is Vegas, after all.)

I had just spent a glorious week in my hometown, Kalamazoo, MI. My batteries were recharged, and my heart was full. I was ready to get back to work, but in this case that meant hopping on a plane, and flying to Las Vegas for a work conference.

I arrived in Vegas Saturday night about 7:30 local time, which seemed like a great idea when I booked the flight. However, I forgot to take into account the time difference between Michigan and Nevada, so my body thought it was 10:30, and I was exhausted. Without an ounce of guilt, I went to bed instead of hitting the town.

Sunday morning I met up with my boss and a couple colleagues, and we attended the day’s sessions. Among the great info shared was a presentation by Stephen M R Covey, of the Franklin Covey Institute. He presented from his book, The Speed of Trust. If you get a chance, I highly recommend reading this book. Not only is is it a great business read, but it applies very well to personal relationships as well. I found myself nodding in agreement throughout his presentation. Afterward, I met Mr Covey, we spoke for a bit, and exchanged business cards. The conference was off to a pretty good start.

That night, there was a party at a restaurant in the Treasure Island casino called Señor Frog. IHG really knows how to show their employees a good time, but more on that later. I got myself a drink, and chatted with a few folks for a bit, and then decided to check messages and emails. I stepped out on the deck to enjoy the night air. As I browsed my messages, I heard a woman’s voice from behind me.

I turned and, not sure if she was speaking to me, replied “I’m sorry…what?”

“Would you like to join us? We’ve got a couple extra seats here.”

All I wanted to do was check my mail. I wasn’t looking to chit chat. In fact, I had just excused myself from a conversation inside to seek some solitude outside. Then my brain said: meh, why not, so I went over and joined them. Am I ever glad I did. I made two new friends with whom I spent much of the rest of the conference, and have kept in touch ever since. Kady is from Florida, while Raven, the woman whose voice it was I heard inviting me over, currently resides in Virginia. Both ladies are fellow directors of sales, and we hit it off right away.

The party was fun, and I had a great time chatting with Raven and Kady, but I was still feeling the jet lag, so I bailed a bit early…after joining in one Cupid Shuffle on my way out the door. Don’t judge me.

Monday brought more great information, and the opportunity to network with several colleagues from IHG corporate whom I otherwise only get to communicate via phone or email. The chance to speak face to face with these folks is invaluable to me, so I look forward to this part of conference each year.

While the party Sunday night was just the corporate-managed hotels (and just the extended stay properties, unless I am mistaken), the reception Monday night was for all of IHG, and as I mentioned earlier they know how to throw a party. Performing that night were Colbie Caillat, and Little Big Town. While familiar with both these acts, I’m not really a fan of either, so I decided to put my Plan B into action: I was going to hit the Vegas Strip, and see a show!

Now, for those of you who have read the blog for a while, you may remember my New York City adventure. It went well, and I had a great time. All it lacked was proper planning. (for a refresher, please enjoy “Enrique’s Broadway Show: A Comedy of Errors,” “Comedy of Errors 2 – These Boots Were Made For Walking (apparently),” and “NYC – The Final Day“) Vegas, it seems, would be no different.

I bought a ticket online for the Cirque Du Soleil show, “One,” which is based on the music and videos of Michael Jackson. Prices were a bit steep, so I bought a cheap seat literally in the last row of the theater. It was another beautiful night, so I set out walking.

Ok, I need to break here to talk about me and walking. I enjoy walking, I do. I just need to do a better job of being prepared for my walking. As with the aforementioned NYC trip, I was once again trudging my way to a theater in my dress shoes. It looked close to my hotel when I looked at the directions on my phone map. Come to find out later, it was actually three miles. One way. When will I learn to look that crap up BEFORE I head out?!?

Anyway, I took some “selfies” along the way, and eventually made it to the theater. Everything was perfection: from the artwork in the lobby, the paparazzi running amok taking everyone’s pictures (which were uploaded in real time to a video display of tabloid articles), to the show itself. Songs from the Jackson 5 era intertwined with MJ hits. Videos acting as backdrop for the amazing Cirque performers. Aerial dancers suspended just above the audience’s heads. Snow falling inside a theater in Las Vegas. A feast for all the senses, I am certain that if Michael were alive to see it, he would love this show. If you get a chance, go. 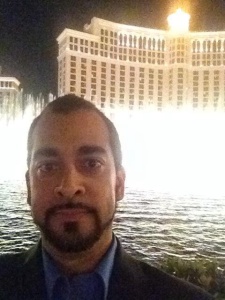 [insert three mile walk back to the hotel here]

The next two days flew by. More training. More meetings. More networking. Raven and Kady were real troopers, and let me tag along with them, including at the closing night masquerade party. If there was a time to let loose, and get a little silly, the masquerade party was the time and place to do it. Each different pool area had different entertainment (dj, live music, performance artists, acrobats, etc), and food stations with varying menu options. Like I said, IHG knows how to throw a party.

Join 449 other subscribers
Follow Musings and Art of KzooEnrique on WordPress.com