It’s well past 1am Central, and I find myself wide awake, my mind preoccupied with many things.  So what do I do?  Get online.  All the experts will tell you that is one of the worst things you can do, since it help stimulate the brain, not the opposite, er go making it less likely to fall asleep any time soon.  And yet I can’t help myself.  You see, I just can’t stop fixating on some recent events.

When I left my hometown of Kalamazoo, I made sure to try and keep in touch with friends as best I could via email and social media.  Especially a few in particular whom I considered to be my closest friends.  But in recent weeks I noticed that contact to be entirely one-sided, and so I attempted to call them.  Three people who, unless I am mistaken, have nothing else in common other than the fact that I once worked with each of them, at three different places, in three very different times of my life.  So to the best of my knowledge, these three have never met.  And yet, the response from each one was the same: nothing.  Not just nothing, but the same exact version of nothing.  Straight to voicemail, with no reply.

I know what you’re thinking, because I thought the same thing.  “Surely they are just busy.  Give them time, and they’ll call back.”  Weeks have passed, and still no calls.  I even tried a follow up email or two.  Nothing.  There are some from whom I would expect a delayed (or no) response, but not these three.  Not like this.  Not now.

I’m sure that my perception of the situation is also heightened by the current circumstances here in OKC.  My attempts at making friends have, shall we say, not gone as well as I had hoped.  Over the last month, most of the people I met when I first arrived have either vanished, stopped communicating, cancelled on me, or outright stood me up.  It hasn’t been a good summer for the ol’ self-esteem, and there are those who will tell you it wasn’t great to begin with.

So here I am at 2am, typing away, I suppose hoping for some sort of cathartis breakthrough to help me sleep.  But nothing comes to mind.  There’s just the sound of my fingers on the keys, and the construction at the Devon Tower construction site a block away. (yes, they are working at 2am and, yes, I can hear it in my apartment…I’ll be quite happy when they are done)

Well, time to give sleep another try.

No sooner did I post this to my blog and turn off my computer, I began to hear the faint droning of an alarm.  At first I thought it was the clock alarm of a tenant above or next to my apartment, and after 10 minutes of it I had all I could take.  I got dressed and went upstairs to investigate.

Turns out I couldn’t hear it upstairs.  I decided to go down to the manager’s office and see if they could help with the situation, but the moment I got off the elevator, I heard the sound again.  I stepped outside, and sure enough, the alarm wasn’t an alarm clock, but rather the fire alarm in the parking garage across the street.

Ironically, after my posting that I could hear the construction at 2am, they stopped and left.  So there was no one there to take care of the alarm.  Oddly, there also doesn’t seem to be any security, either, so if you’d like to break into some cars in downtown OKC or wander around the under construction Devon Tower, apparently there is nobody to suggest otherwise.  So, since it was obvious nobody else was going to step up, I called the police, who in turn called the fire department, who then sent two ladder trucks to the scene.  At about 2:45am, the alarm was shut off. 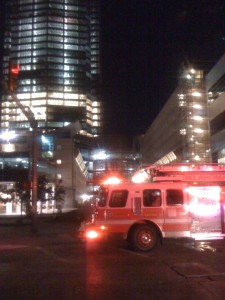 One thought on “Late-Night Ramblings”

Join 449 other subscribers
Follow Musings and Art of KzooEnrique on WordPress.com